So when it comes to salad some of my favorites always involve crisp fresh cucumbers....

And this creamy cucumber salad recipe is no exception! It's light, easy and comes together quickly with only a few ingredients.

Another cucumber salad we enjoy is this Cucumber & Black Bean Salad recipe!

HOW TO MAKE DILL CUCUMBER SALAD

(Full directions in Recipe Card below)

First you need to rinse the cucumbers and then thinly slice them.

Place the sliced cucumbers in a colander, sprinkle with salt and set aside in a bowl to drain while preparing the dressing.

Next thinly slice the red onion and set aside.

Prepare sour cream dill dressing according to directions in recipe card below.

HOW LONG CAN I STORE THIS SALAD

This salad can be kept in a covered container in the fridge for 3-4 days.

After several days though the cucumbers start to release extra liquid. So you can freshen the salad up a bit by draining the liquid and adding a little extra sour cream.

It's actually best if the flavors have time to blend several hours after preparing the salad and eaten the day of.

You can use plain greek yogurt in place of sour cream or do half of each....

Dried dill can be used in place of fresh although I highly recommend using fresh.

You can use yellow onion in place of red onion.

OTHER SALAD RECIPES TO TRY...

I’d love to hear if you make this & how you like it. Plus please be sure to include a star rating. 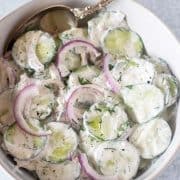 Hi, I'm Stephanie! The Recipe developer and writer behind APPLES FOR CJ. Welcome to my Happy Place! Here you'll find a collection of my Best Gluten Free & Vegetarian recipes, along with some healthy lifestyle tips. Hope you'll stay awhile!