Quinoa Tabouli Salad is a simple salad that is made with fresh chopped vegetables & a light lemon dressing. Quinoa is used instead of bulgar wheat which is traditionally used in tabouli, making this a healthy fresh gluten free option. Vegan & Gluten Free.

So Happy first official day of Spring to all my favorite internet friends!

Can you believe it's already here? Even though losing that extra hour of sleep last week wasn't fun nor ever will be , I'm so appreciating the extra day light and warmer temps.

SO I wanted to celebrate it today with this yummy, easy to prepare Quinoa Tabouli Salad....

Cause nothing celebrates Spring more then a quinoasalad! Wouldn't you Guys agree?

Since Tabouli is traditionally made with bulgar wheat I kind of stopped eating it after adapting a gluten free lifestyle.

But it's always been one of my favorites, especially alongside a bowl of caramelizedonionhummus so I wanted to create a version that was just as good without the gluten.

And tada here steps in Quinoa, the perfect base for a tabouli salad! Light, fluffy and in my opinion is ever so perfect for this...

Probably even like it better then the version I used to eat years ago.

So you see Guys...sometimes change really can be good.

Ya know, extra daylight, quinoa tabouli , and how about cauliflower for your pizza crust? Let me tell you there is a reason it remains one of the most popular posts here on AFCJ.

Well that and this Spicy Crock Pot Cauliflower Mac & Cheese!  ⇐ A must try for sure!

Cause I'm here to tell you that cauliflower is another one of my favorite healthy swaps!

But let's get back to the recipe for today.

Quinoa Tabouli Salad should also be on your short radar since it's.....

Until next time- xoxo 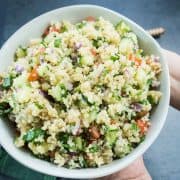 This recipe was made with white quinoa. I usually soak my quinoa in cold water for about 15 minutes and rinse prior to cooking. 1 cup of uncooked quinoa yields about 4 cups cooked(so you would have a little extra). Can be stored in fridge covered for up to a week.
Tried this recipe?Mention @applesforcjblog or tag #applesforcj