These Baked Homemade Hush Puppies made in one skillet are a healthier option than deep fried. Baking in a skillet gives them  a crunchy crust with a super moist center. Gluten Free and Vegetarian.

Okay so I'm going switch it up a little with hush puppies since they're typically deep fried.

But one pan and baked is always an easier and healthier option for hush puppies in my opinion.

That can be baked in one skillet and still have that crispy texture without frying.

And are the perfect side with almost any meal.

So when the husband said hush puppies used to be his favorite thing when eating seafood I was on a mission.

Because I absolutely love a challenge in the kitchen and it's even better when some one like hubbie requests it.

And even though we don't eat seafood anymore..doesn't mean you can't have Hush puppies.

They go great with baked fries, coleslaw, beans and so much more.

Anyway, so I'm thinking..uhhmm, these need to be a lot healthier version than what you could buy.

They need to have all the flavors of a traditional hush puppy, yet in a baked gluten free version.

And of course, I thought "I got this", not going disappoint the hubby or me for that matter.

Cause I used to love those little fried balls of cornmeal also and remember filling up on those.

But these my friends are even better. They're bigger, more flavorful and baked not fried.

So mission accomplished and old favorite is now part of our menu again.

Do you guys have something you used to eat years ago but haven't made in a while?

Whether it be from changing your diet due to making healthier choices or allergy restrictions.

What are these hush puppies made of

Other sides to try 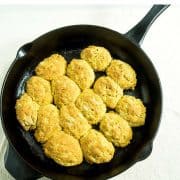